How to use 80+ Grid layouts while building a website

Get the widest variety of Grid layouts for your web design. The Grid Elements helps you to make your designs mobile-friendly automatically. 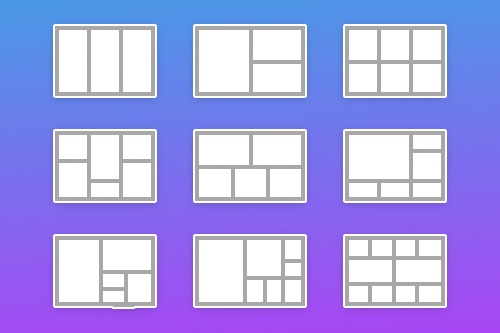 Use our Website Builder to design and create websites without coding. Drag and drop anything you want, to any place you want it. The Website Creator automatically adapts your website for mobile to make it responsive. Choose from more than 10,000 customisable website templates. 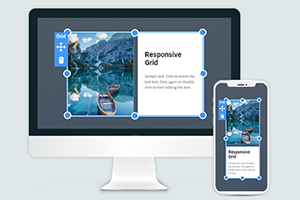 Use the Grid Element to make the Responsive Modes easily. On the smaller screens, the Grid Cells move one under another automatically.

You can easily change the Grid's width from Boxed to Wide and vice versa. Select a Grid, then go to the Property Panel. Locate the Boxed/Wide icon near the Width and Height values, and change the Gird Layout by clicking that icon.

If you need to create fancy layouts for your images, shapes, and texts, you can resize Grid Cells having various widths giving your designs a modern look.

Hover Slider On A Grid Cell

The Slider Animation is a very popular reaction on Hover. You can add various effects for Grid Cells, for example, Fade, Overlay, Slide, Flip, Wobble, and Zoom. Select a Grid Cell, then go to the Property Panel. Click the Hover Slide link, then choose the effect you want to see on the Grid Cell's Hover.

The Grids allow organizing various content, including images, icons, shapes, and text in the form of cells, which are very convenient to operate. In our visual editor, you can easily move cells in a Grid by simply dragging one Cell over another, perfecting your layout and content for your web design. In addition, you can click on the Arrow Icons on the Cell's context tool to move the Cell.

You can change the layout of the added Grid to a Block at any time. Select the Grid Element, then go to the Property Panel. Click the arrow to open the List of the Grid Presets and select the layout that suits better your web design idea. You can also add and remove Grid Cells in the Editor.

The Grid Element is very flexible. You can adjust its layout for the requirements of your web design idea. To flip the Grid that you placed in a Block. Select this Element, then go to the Property Panel to the right. Click the Flip drop-down list near the Grid Layout. Click the Flip or Rotate to perform the operation.

A Cell of the Grid Element can have a Background, and you can use various types for it. You can apply the Color Fill, Gradient, Image, Video, or have no Background at all. Select a Grid Cell and go to the Property Panel. Choose a Background Type that best suits your web design.

You can change the spacing between the Grid Cells by your web design requirements. For that, you can use the Cell Gap Property in the Property Panel. Select a Grid, then go to the Property Panel, scroll down the Panel, drag the Slider to modify the Gap.

Get started with our best templates, great for any business. Create and customize them with our powerful and free website builder with no code. All templates are mobile-friendly and look excellent on any device.

Use The Widest Variety of Grid Layouts

Grids are such an important part of web design, and as you can build and use them for your site, time to begin measuring and aligning them. Many designers use a design concept known as the golden mean to improve the sizing, the balance, and the positioning of their layout grid design examples. In the history of graphic design, grids are very useful instruments to offer users a good user experience. Web designers often use the grid template when they want to divide content into pieces. The grid layout design means using a certain grid or group of grids, dependent on what is to be achieved. As a rule, all of the grids in the website design, regardless of how small or large, complex or simple they are, all have common elements that determine them to be a grid layout. A common way to create a great design is to use the rule of thirds to identify the best grid and layout decisions.

Traditionally, grids are found in printed products but are quite usable in web design. Baseline grid templates have space between columns, and we call gutters this space. Using grids that split pages vertically and horizontally into rows and columns. Gutters also are the space between rows. Spacing between columns is proportional and is consistent throughout the whole page. The 960 grid system is popular. The grid 960 organizes the web design workflow by providing commonly used sizes based on the 960-pixel width. Standard grid layouts allow breaking the grids in several ways. Using grids, designers can create creative grid layouts, also image placement. In our editor, you can easily place web page design elements, create grid systems, and control this process fully. You don't need to sign up on our website. Only open the editor and start working. A grid layout allows web developers and designers to follow the latest trends and create a wonderful new web design.

The practice of thirds says that locating 'objects of interest' in particular 'thirds' of the picture will capture the user's attention in a more effective, visually attractive way. You can create a three or four three column grid layout with colorful columns with our tool. It is a simple way to create a minimalistic design. You must determine the base elements of the grid layout design, such as spacing between baselines, other visual elements beside grids, which the base element is placed between the column grid and other content, and so on. With our tool, you can easily change the columns or rows of the grid in your responsive grid layout. There is an opinion between designers that grids impact web design without including other elements. If you don't know how to create a grid layout easily with a grid system (which uses a nice column grid), open our editor and start your project now.